You can see a man in Lions Jacket serving drinks. He can’t see how and how many participants are running but he is serving and cheering to all the runners.

Yesterday When I opened my I phone to check emails, one email drew my attention about the Half Marathon in Berkeley, where I have been living and doing business since last decade. So obviously I read the email where our Lions Club President requested all Lions fellow to spare time to volunteer half Marathon, I immediately responded that I will be there to help and called my Son Prasidh if he is interested to join me, He without spending a moment agreed to join me. But he immediately asked me if he could join this Marathon and I said it’s too late , you can join next year but you can volunteer and get some experience serving runner. It was a first Marathon in Berkeley on Nov.24,2013 where 8,000 runners have signed up to run Berkeley’s most scenic route of 13.1 Miles crossing Civic Center to the UC Berkeley Campus passing through the waterfront.

I love sports and was always an active sports person during my School and college days , though never played as a professional player in my life. Because I was also focused in my studies and in our time there were no future in sports and even most of the parents never wanted their kids to spend their time just playing. Though they love and appreciate great players and sports person in their life time. So I have participated many games and sports and represented School and college. Specially in Table Tennis, Soccer and volley ball, though my height is not up to the level to be a great volleyball player but always I was given chance to represent My School to University days.

Beside that I loved to run not like a full marathon but participated and selected among top five in Cross Country while I was in Kalimpong during late 80s , in our time I was also a NCC and represented many states to National level training and I still remember the days when I participated a marathon in Darjeeling starting from Ghoom to North Point Ground during my National integration camp. So even today I get excited when I hear any sports like that and now My Son Prasidh also participates Cross Country from his Middle School and last two month he spent every weekend running with different Schools of Contra Costa School District. I like him participating any sports here in this country where he can even make his career in Sports. He is also good in Karate and represented his dozo and won various Medals. But right now as all parents our concern is to focus in his studies.

Early in the morning of Nov.24, we reached to the site where we were assign to serve as a volunteer. We were asked to attend the event place at seven in the morning where we will be serving in a booth providing medical aids or supplying water and energy drinks to the runners. I was expecting at least four or five lions fellow from our club to be there but unfortunately I didn’t see any one of them including our Club President. I and my son immediately started serving the drinks to runner, I don’t know if other fellow lions friends were in some other booth or no one shown up. Next to my son there was a blind person in Lions Jacket serving drinks to runner with full of excitement that really impressed me.

Any way it was really a satisfying and enjoyable service where we were supplying drinks to runners. It was really a great fun event because there were many  entertainment, cheering stations, specially designed mile markers and surprises, concluded at the finish line at Golden Gate Fields in Albany, where a post-race festival with  runners lounge and yoga and beer garden were organized.  I thought the runner will pass our booth within ten to fifteen minute but it took almost two hours, it was really amazing there were participation from different age group to ethnicity, I guess there should be few runners from Nepali Community too, though I could not recognize or met them personally but seen many runners from India.

I was told that the event is a benefit for local causes, and runners can designate one of 11 charities when registering, including the Berkeley Public Schools Fund, Berkeley Partners for Parks, and Berkeley Food and Housing Project. so our small support and volunteer also count as an effort to raise fund for said organizations. I have  seen an incredible outpouring of support and excitement from the city of Berkeley and neighboring places.

Registration for all events was  open, and organizers announced the half marathon was 60 percent full. Half marathon registration was $85, the Bearable 10-mile race is $60, and the 10k race registration is $50. Teams of 15 or more can register as a group for a 15 percent discount.

After serving drinks to my booth I had to go another place for lunch and see how Karma Kitchen’s Volunteers are doing in our Restaurant – Taste of the Himalayas, Berkeley.  So we moved out from the event place as soon as all runners crossed our both and I informed Lions Club of Berkeley that I have to leave early, He really appreciated our presence specially to my son because he is just 13 and serving in the name of Lions Club. So I didn’t get chance to attend the closing event but later came to know that  Berkeley resident  Anna Bretan and UC Berkeley student JP Slater were the winners of today’s first Berkeley Half Marathon.  Bretan, who won the 2013 San Francisco Marathon, had an unofficial time of 1:17:19. at the inaugural event, while Slater won the men’s field with an unofficial time of 1:07:05. on the event I came to know that The Berkeley Half Marathon drew nearly 8,000 runners participating in one of the three race distances. More than $50,000 was raised for participating charities including Berkeley Public Schools Fund, Berkeley Partners for Parks and the Berkeley Food and Housing Project. I am expecting my son and if possible I would love to join next year not as a Volunteer but a runner. 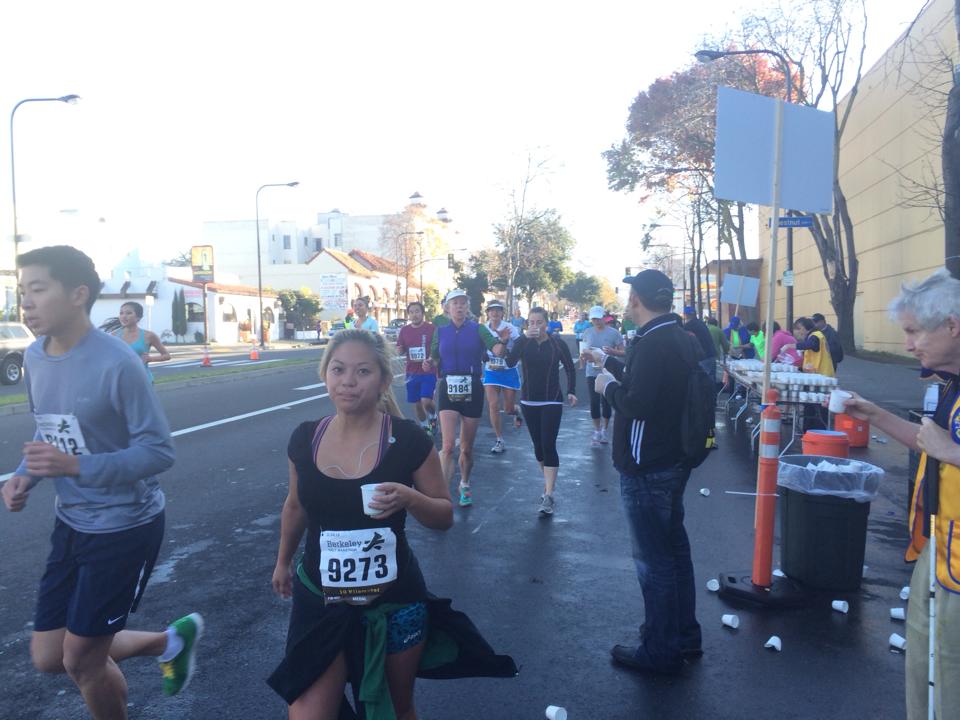